The start of something great...maybe

It started with a rush of blood and ended with an agreed annual adventure. July 2012 saw the birth of the annual Whiskey & Ginger weekend. Six enthusiastic toddlers and their tentative families descended on Roundhill Campsite, Hampshire amid the wettest summer on record. Who knew what the next 48 hours would hold. 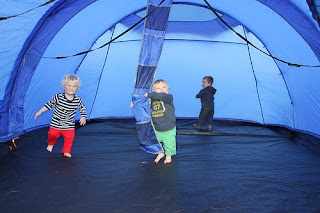 Friday the 13th
Bryony, Dan & Freddie arrived just after midday to find Roundhill resembling a estuary more than the forest oasis they were searching for. After half an hour of Bryony marching around the campsite followed gingerly by the trusty Ford Focus they found a spot capable of accommodating 6 families without anyone being under water...just. Jake, Alex and Angus arrived shortly after with parents in tow. It quickly became obvious that all tasks, regardless of how trivial, would be meet with huge enthusiasm by the boys. Unloading the cars...putting up the tents...inflating the beds.

The administration of setting up the campsite soon wore thin on the boys and the lure of the cows and puddles beyond our camp city walls became irresistible. Before long an expedition was underway, led by the boys. Cows were interesting, puddles were far more fun....it quickly went pear-shaped.

Meal time was always going to be interesting. Although 5 toddlers, no seats and limited cutlery proved no messier than a normal dinner time. Amazingly the boys downed Bry's homemade stew and were in bed and quiet in time to allow the adults to eat, drink and share war stories from the first 18 months of parenthood.

Day 2 - Saturday 14th July 2013
'Lets go play in the garden' were the first words uttered by Freddie at about 5am. The garden being the bramble, mud and puddles - play being chasing horses. The adults awoke relatively chipper & surprised that they had made it through the night. The highlights of the after dark antics being Jake sleeping in a cardboard box and Pam without a mattress - an oversight Matt may never live down. Before the horse-bothering could begin breakfast was served, Bryony distributing fruit and scones to the gannets. 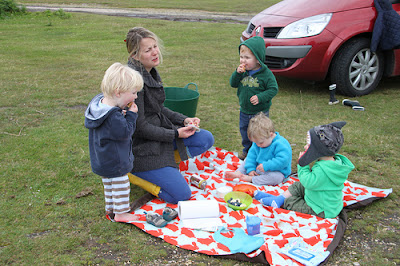 Once all the New Forest ponies had been run out of town and an escape attempt by Freddie & Jake foiled, it was time for an adventure.

After the disaster of the waist deep puddles the previous day, drier climes were sort at a local farm (http://www.longdownfarm.co.uk/). This turned out to be a good call as the barns sheltered us from torrential downpours. The mini tractors proved the biggest hit. Arlo, Ralph and parents greeted us at the campsite when we returned increasing our merry group to 6 toddlers plus entourage. Pete's borrowed tent proved the most challenging to assemble.

That afternoon it was decided we would impose ourselves on an unsuspecting settlement. Lymington was the unlucky town to receive us. Lymington happened to be playing host to one of the weirdness Jubilee parades the world has ever seen...


Meanwhile across town Alex decided to throw up all over himself in a local pub...too many Kronenberg & kebabs, essentially spelling the end of the Agar's stay. After the trauma of the parade Freddie, Arlo, Angus and families dined in an uncomfortably hot restaurant, affectionately known as Bikram Fish & Chips. The heat was so oppressive that the staff had lost the ability to count and write, consequently what arrived on the plates bore little resemblance to what was ordered.

Dinner was almost a non-event as Ralph lead the boys in a raid of the cool boxes in the afternoon. But once the time came dinner and bedtime went down with limited drama, the wonders of the fresh air! Once again the parents were able to relax and chat without the boys. With common sense out the window courtesy of Whiskey & Ginger it was agreed that the adventure would become an annual event. Rob & Helen stepping into the organisers shoes.

Day 3 - Sunday 15th July
Amazingly all families made it through the night without a hitch. To bring the curtain down on the first Whiskey & Ginger weekend everyone piled into a local pub for lunch (http://www.thesnakecatcher.co.uk/). From memory the food was terrible, but this first foray into toddler camping was always more about survival than substance. 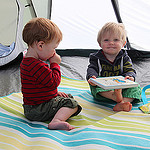 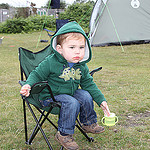 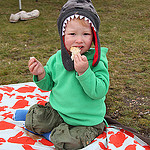 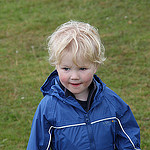